Outing to Hartland Abbey 8th May 2017

There will be an outing to Hartland Abbey and non-members are most welcome to join the trip.  The coach is £14.50 per person which includes entrance to the Garden only.  If you wish to go around the Abbey there is an additional charge of £3.00 per person.  The coach leaves the Square at 9.45 am with pick ups in Braunton and Barnstaple, leaving Hartland Abbey at 3.30 pm.

The first meeting of the 2017/2018 year saw a record 41 attend an Annual General Meeting.  Of those attendees 10 people joined with new members from Braunton, Bickington Fremington and Chittlehampton.

The AGM took its normal format and we were pleased to welcome Nina Parry back on the committee – who are now ‘The Magnificent Seven’.  Again it would be nice to welcome some new, younger blood to the Club to ensure its survival.  Subscriptions will be kept at £6 per annum and £2 entry for members and £2.50 for non members.

The competition winners for the year 2016/2017 were joint first – Pat Rothwell and Ruth Verney and second – Gill Ginnings.  Details of an extra event were announced – a trip to Hartland Abbey on Monday, 8th May by coach – we were impressed with the garden when Nigel Alford, the head gardener, visited last year.

Andy gave us a demonstration of the new remote control screen and said the new projector was to be fitted soon so we would be able to make use of the new equipment bought for the Parish Hall from grant applications made by us and the W.I. to secure funds from the Solar Park Grant.

Our new members from Fremington Gardening Club invited us to their 150th anniversary party on Wednesday, 17th May.  Their Chair had delved into the North Devon Journal records to establish when the club was formed – we thought we were doing well at sixteen years old.  As well as the celebration goodies to eat and drink, Mark Baker from Tiverton Canal will come along to entertain us.

We were delighted to welcome Anni and Graham from North Devon Hedgehog Rescue based at the bottom of Fox Hill just before the A361.  Graham started the evening off with a clever hedgehog quiz – he asked the questions we had three possible answers to choose from – what a clever way of getting over facts and figures about hedgehogs.  He told us more as he told us the answers.  It was a sad fact that many members had not seen a hedgehog for years – an indication of how few of these lovely creatures are about nowadays.  A few had been spotted in the local area which is good as there are so many badgers around.  Anni then told us how she cares for the hedgehogs she rescues and there were lots of photos to look at and pamphlets to read. She explained to us how we as gardeners can prevent them from getting injured, drowned or poisoned.

GARDENING CLUB members who were undeterred by warnings of snow found that the planned speaker on Bees had been unable to be present. However we have been invited to visit the Quince Honey farm at a later date for a private visit and talk.

The committee had been busy during the short time available to plan an alternative and presented a very mind challenging Quiz. The first section had questions related to plants Some being connected to sayings and songs, This was won Laurie and Di Pine. The second, in which we worked in groups had clues that appeared very daunting, but eventually resulted in high scores with little to part the teams.

In February the Hall is booked for the West Down Amateur Productions play. Instead of an evening meeting a day trip and lunch at RHS Rosemoor is planned.. This will be on Thursday February 21. Meeting at the West Down car park at 9.30a.m. to share transport. Please inform Ruth if you intend to come. ( Tel. 01271 862250)

Green Field project. The proposed allotments will be ready for the coming season as numbers at limited and will be allocated on a “first come, first served” basis.

An appeal was made for anyone interested in joining the Committee to come forward in advance of the A.G.M. which is in March.

The meeting was very well attended for the visit of Malcolm Pharaoh. He is the Head gardener at Marwood Hill Gardens coming there in 1972 after training at RHS Wisley. He showed slides and spoke of the development of the garden and took us through the seasons, from Snowdrops to falling autumn leaves. The various National Collections kept there are a great attraction. There are many plants and trees growing in the grounds that were collected by the late Dr Smart. He then showed slides taken on his journeys to see the native plants in very mountainous regions such as Chile and Argentina. He then went plant hunting to Australia and New Zealand. The final destination was Vancouver Island and the Butchart Gardens. The competition for a home made Christmas Cracker resulted 1. Andrea Staddon; 2 Ruth Verney; 3 Roger Parry. It was announced that the team that represented us at the annual Braunton Horticultural Society Quiz were delighted to take second place. The members were Di Pine, Jane Devlin, Jackie Milson and Ruth Verney.

I timed my trip to the West of England perfectly. The reason for my visit: I was invited to speak at West Downs Gardening Club on spring flowering bulbs: a subject close to my heart as you know. I had a wonderful evening with the Devon Gardeners, sharing our knowledge and enjoying some fantastic home-made cakes. Great British Bakeoff, eat your heart out! I judged their competition: an arrangement of autumn leaves and berries. There were many superb entries, far more that you would see at many gardening club competitions. Why is it that these remote village communities do it better and really get into the spirit of things?

Andy McIndoe’s visit was an outstanding success. The hall was well filled and we enjoyed the talk on “Spring Glory” Telling us the bulbs to grow in different situations and explained the reason that some varieties increase year after year and others disappear after one or two seasons. Colour combinations and backgrounds were shown to have great effect. A little forethought can extend the pleasure over many weeks if the flowering periods of the varieties are given some consideration. The conditions in which bulbs are kept prior to being purchased and planted can make a great difference to the growing ability of the bulb or corm. He told us that the cost of bulbs were really good value and likened the price of 10 tulip bulbs as being the same as a cup of cappuccino!

After the talk there was a variety of home made cakes to enjoy with our tea or Coffee.

The competition was an arrangement of autumn foliage and berries. There was a large entry. Mr McIndoe told us he had some superb arrangements to judge.

The speaker at the next meeting on November 15 is Malcolm Pharaoh from Marwood Hill Gardens.

The subject was the Barn Owl Trust and this attracted a large attendance to listen to David Ramsden, He illustrated his talk with some lovely slides. The falling population of all Owls is of great concern, the reasons for this are various. Loss of habitat and decreasing amounts of food due to the loss of rough unimproved grassland and one third of all young birds are killed by vehicles on the every growing network of roads. Their food supply of voles and shrews can also prove a danger as a large percentage of Barn Owls have been found to contain traces of mouse/rat poison.

The members competition for a photograph of a bird in a garden resulted – 1. Andrea Staddon; 2. Laurie Pine, 3. Janet Tolman.

The green field bought for the village by the Fullabrook Windfarm CIC fund is expected to include a quiet area for relaxation – the Gardening Cub may be involved in helping with its design and planting. Allotments are also being planned and those interested should contact Diane McGahran.

Team members are required to enter a team in the Annual Braunton Quiz, this is on Tuesday November 5.

The speaker was Dick Fulcher from Pine Cottage Plants at Eggesford. The subject was Agapanthus. This plant was first introduced into Europe in the 17th Century . It originated from the cape of South Africa. They are herbaceous perennials, some being hardy but others need winter production . We learnt about propagation both from seed devision and by modern methods of vegative reproduction. There were an array of plants on show and for sale. He answered numerous questions from a very interested audience.

Several new members were introduced and visitors were welcomed.

Members are very much looking forward to a return visit in October of Andy McIndoe from Hillers Nurseries.. Members were asked to make this widely known as this meeting will be open to non-members.

Suggestions for a long week-end break similar to the recent trip which visited gardens in Yorkshire were made. This would probably be in June next year. As there were several interested in joining a trip a choice of itineraries are being considered and prices will be obtained.

Despite the poor weather there was a surprisingly good entry for the members Mini Show held at the Parish Hall.

The potatoes given to members in the spring and container grown were brought back for the long awaited “weigh-in” 35 people brought bags, buckets and tubs containing their still growing potatoes.. Fortunately the evening was fine and the potatoes were all lined up outside the Hall. These were then dug up and the weights recorded.. This revealed some wide differences The heaviest crop was that grown by Andrea Staddon with 6lbs 10ozs, 2nd came Lloyd Staddon with 5 lb 7ozs. 3. Ruth Verney with 4lbs 3ozs. At the lower end of the scale were two contestants which each recorded 4.5 ozs

Judging of the entries in the flower and Vegetable classes was by paper vote from those attending. The class winners were-

In addition to the Show there was a sale table with a wide range of plants on offer.

A Barbecue added to the enjoyment of the event and raised hopes of better days for gardeners to come. 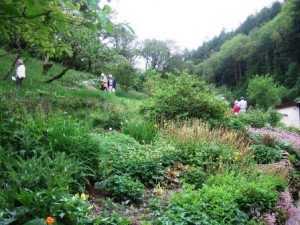 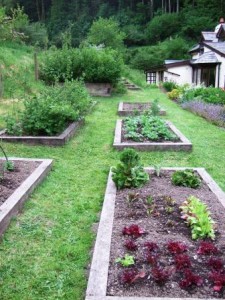 Sunday 27th May – a visit to Tim & Tim’s garden in the Sterridge Valley. A former mill with stream & a garden built for mountain goats. Like all our visits we pretty well avoided the rain.