The Bells and the Ringers of West Down

We are pleased to announce that West Down came in second place and won the cup at St Giles yesterday at the Devon Major ringing qualifier.  We now go to the final at Ashreigney in June.  Well done and thanks to Margaret and Fred White, Trevor Sellick and Tonys Jeffery and Barrable.  Great team.

The Bells and the Ringers of West Down

For hundreds of years the bells of West Down Church have pealed out their message. There is the regular call to Church services, sometimes they peal with joy at a wedding and a muffled peal is rung at funerals and national disasters whilst in November they mark Remembrance Sunday.

It was recorded in the North Devon Journal of December 1914 “that on Christmas Day the bells were merrily rung at 6 am”.

Records show that there were three bells as long ago as 1553 and these survived until the 18th century. In 1794 a licence was granted by Bishop Buller to take down these three bells, two of which were broken. They were then cast into five, as it was not uncommon at that time to recast into a greater number of bells.

These five bells are:

Number 5. Inscribed “I to the Church the living call and to the grave do summon all” names and dates repeated. The diameter is 38 inches.

Now to the 6th Bell – this was dedicated in 1879 and was a ‘treble’ given by Mr Anderton of Trimstone. It was cast by Llewellins and James of Bristol.

The Bellringers of St Calixtus have over the years an enviable reputation for winning competitions in the art of change-call ringing and have become among the most successful in Devon.

One not-to-be forgotten event was on May 15th 1954 when Queen Elizabeth and the Duke of Edinburgh returned from their post Coronation Commonwealth tour. A BBC Radio broadcast to celebrate this occasion included the bells of West Down. 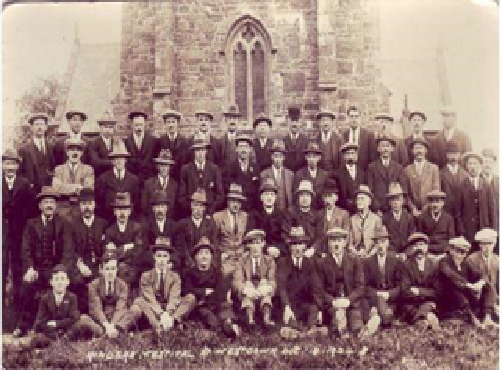 On the back of this photo is written

Some have been identified Back row – second from left – Lionel Hookway who farmed Higher Aylescott. sixth from left Jack Taylor who was the village blacksmith trading from what is now the garage of Fairview Cottage Next row is believed to be flanked by the two Churchwardens at the time – on the left is Mr Will Tucker who farmed Dean Farm and on the right Mr Alf Roach who was the postmaster and shop keeper. Third from the right in this row is believed to be Alf Copp. The Vicar in the paler hat is believed to be the incumbent at the time – the Rev.Piggot